Multiple waves can be in the same position at the same time. Unlike particles, waves pass through each other without interacting.

Ears are able to detect separate sound frequencies, even though they enter the ear in a superposition. This spectrogram lets you visualize the frequencies that make up various sounds.

The Wedge is a famous surf spot that has some dangerously fun waves because of interference from waves reflected off a jetty.

Question: A wave is created on each side of a rope with an amplitude of 0.3 m. The waves interfere as they pass through each other.

Waves add constructively when both wave amplitudes are positive or both are negative. This produces a higher observed amplitude. Constructive interference is how two speakers playing the same song are louder than just one.


Example: Draw the superposition of these waves. They have the same wavelength, so they only add constructively.

Waves add destructively when one wave amplitude is positive and the other is negative. This produces a lower observed amplitude. Destructive interference is put to use in noise cancelling headphones.


Example: Draw the superposition of these waves. They have the same wavelength but they are out of phase with each other. They can only add destructively.

Example: Draw the superposition of these waves.

Adding many sine waves together can produce some interesting waveforms. These waves are starting to look like sawtooth and triangle, but they need more contributing sine waves.

Interference is even more complex and interesting in higher dimensions.

Some of what makes music sound good depends on the cultural background of the listener. Listeners used to the western music tradition generally prefer sound waves that have a simple ratio between wavelengths.

Question: Guess which of these combinations would sound better in the western music tradition?
Click to see the waveform recorded by your microphone.
Click again to toggle pause the recording.

Microphone: Which side of the spectrum is the treble and which is the bass?

Example: Draw the superposition of these waves. When waves have similar frequencies they produce a pattern called beats.

You can decided if you hate the beats sound by clicking

Music theory explores what groups of notes sound best together. It's interesting how you can evoke emotion with different combinations of notes. For example, the major scale sounds upbeat, but the minor scale sounds sad.

Waves tend to spread out in every direction possible within their medium. Diffraction is when a wave spreads out after some of the wave hits a barrier. This explains how sound can be heard through an open door even when there is no line of sight.

Diffraction can be explained by thinking of every point on a wavefront as the source of spherical waves. These spherical waves interfere with each other to produce different patterns.

You can see examples of diffraction in these 2-D ripple tank simulations:

Single Slit: Waves spread out in a circle as they pass through a gap.
Double Slit: Notice the pattern of constructive and destructive interference.
Half Plane: Waves curve around a wall.
Obstacle: Waves of the right wavelength can almost ignore a small barrier. 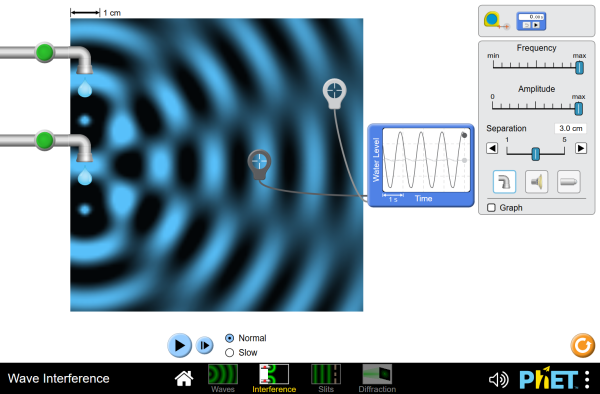 The Doppler effect is heard when a source of sound moves past an observer as a "vvvVVVRRROOOMMMmmm". The observed sound drops in frequency very quickly as the source zooms past.

A sonic boom occurs when the source of sound is moving at the speed of sound. Can you produce a sonic boom in the simulation above?

Light can also be Doppler shifted, but it is harder to notice because light moves so fast. A light source near the speed of light will noticeably shift in color.

Astronomers use this color shifting to calculate the relative motion of far away objects. In 1929 Edwin Hubble published the observation that almost all galaxies are redshifted. This was the initial evidence that the universe is expanding.

Redshifted light from stars expanding away from us is actually the main reason why the sky is dark at night.

The Doppler effect is used in laser cooling to produce temperatures near absolute zero.

Question: Imagine you are driving towards a cop with a radar gun. How will your motion affect how they see your reflected radio waves?

Rigid solids oscillate. They swing back and forth at a consistent rhythm. Springs, bridges, buildings, wine glasses, and musical instruments all oscillate. We also see oscillation in lasers, atoms, electric circuits, orbits, swing sets, and pendulums.

Systems that oscillate have a natural frequency for their vibrations. When no external forces are applied they will always oscillate at the same frequency.

A standing wave is a wave that oscillates in time, but does not move through space. Standing waves occur in most musical instruments in the form of vibrating strings or columns of air. You can produce a standing wave if you shake a string at just the right frequency while someone else holds the other end still.

Standing waves occur when two waves moving in opposite directions interfere with each other. This often occurs with reflected waves in a cavity, like a pipe. You can see a standing wave clearly in a Rubens' Tube.

In a bounded region the waves reflect off the walls. For most wavelengths the numerous reflected waves interfere destructively to produce a superposition of zero. When the wavelength fits evenly into a closed region the reflected waves resonate with each other to produce a standing wave. The wave looks like an alternating constructive then destructive interference pattern.

This simulation calculates the superposition of 64 reflections in a bounded region. Only certain wavelengths resonate to produce a standing wave.


Simulation: for at least 5 wavelengths that resonate to produce standing waves.

Question: Count the nodes and anti-nodes in the bottom standing wave.